The incident with our dog and the workers 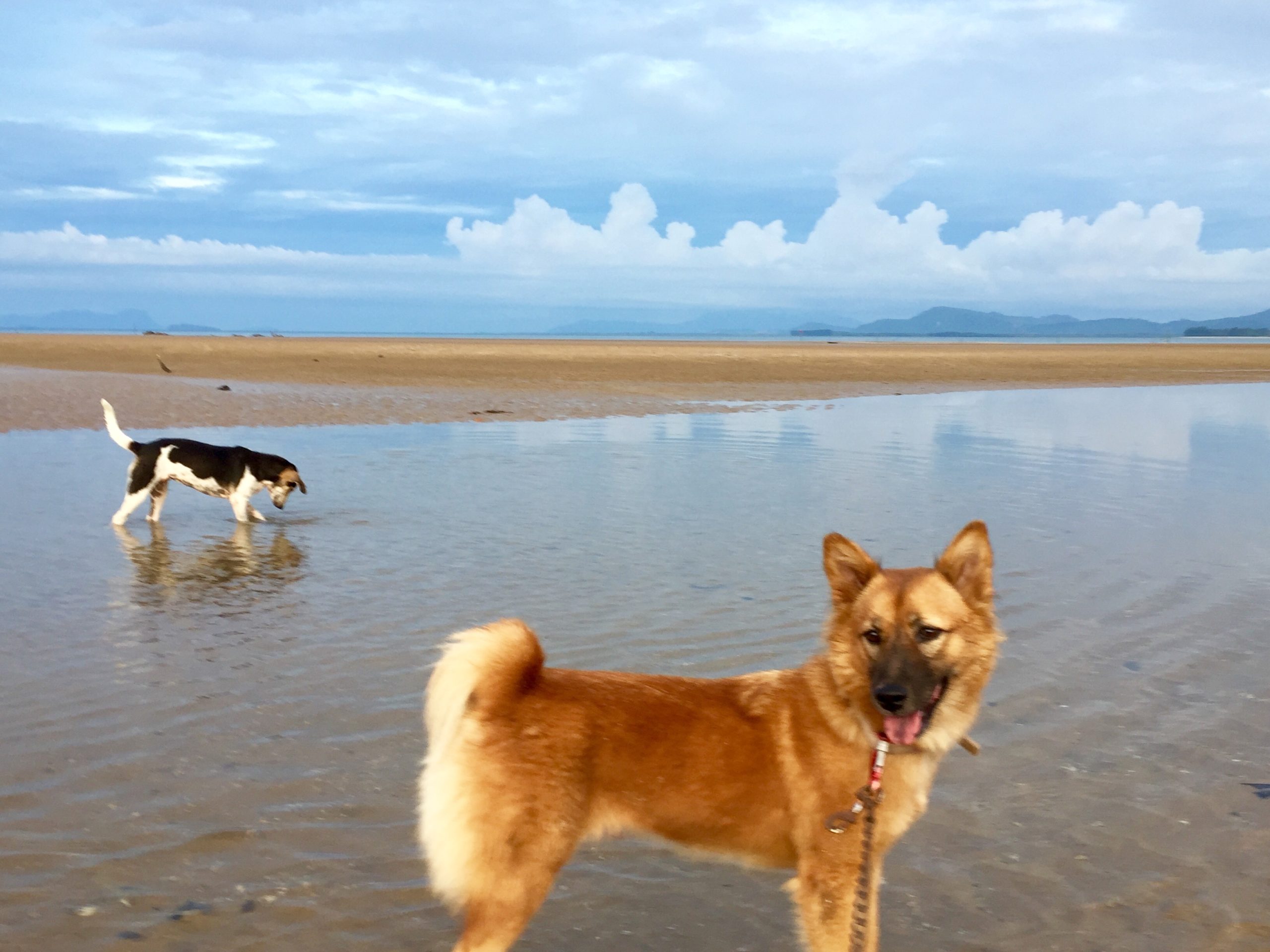 I have now been at my current workaway for 2 weeks painting my life away for a resort that will donate 50% of profit to Orangutan Project and have finally begun to really see the workers on site that have been here since my first day. I feel pretty ashamed that I didn’t give them any attention until just recently. I ignored them at first because as with each Asian country I’ve been to so far, they all stared and this group stared and laughed.

On my second day here, one of the workers brought me a bag of jack fruit. My guard began to lower a bit but they all still stared and laughed and all would taunt the dogs on the site which of course ruffled my feathers. On the 4th day, my friend that brought me the jack fruit saw me struggling with painting ceilings and helped me fix the paint roller I was using onto the extended stick. This helped me immensely as I was starting to get an awful cramp in my neck and shoulder. Still, I would see him agitate the dog and I would get frustrated because I didn’t know how to explain to him that the dog would only be more aggressive the more he kept on with his ways.

Dogs in Borneo are not seen the same way us overprotective westerners see them because in several parts here, it is difficult for them to take care of themselves. Indonesian Borneo was much less likely to see dogs as pets. When I was in Central Kalimantan Borneo, I asked what some of the popular foods were in one of the villages, and I was told dog. In Malaysian Borneo, that hasn’t been the case that I’ve found so far. However, the fact that there is no veterinarian within hours of the town I am in goes to show how little medical support dogs get here.

Also, the way these workers take care of themselves shows how difficult it is for dogs not to be neglected here. When one of the workers got a deep cut in his palm, he cleaned it right in front of my eyes by opening the gas tank on the chainsaw and pouring the gasoline over his wound. Of course dogs aren’t pets to them, they have a hard enough time taking care of themselves.

At the end of my first week here, I was the only non-local worker on site, and since it was Saturday, I thought they weren’t coming back after lunch. I decided to go upstairs and practice yoga in my room and thought it would be okay to leave our temperamental dog downstairs. Halfway through my practice, I heard lots of barking so I came downstairs. When I got to the dog, I saw she was hiding and that there was a broken brick very close to her that was completely out of place.

I imagine they had thrown it at her to get her to back away from them and not attack them. I picked up the broken brick and showed it to my friend that had helped me with the brush, since he was closest, asking him without any words why it was there. They just pointed at the dog and just asked for her to be placed on a shorter leash.

I felt helpless. How could I get them to understand that their fear and perception of dogs was what was causing her to be aggressive toward them? How could I get them to stop taunting her? I though about it a few minutes and realized I hadn’t made any attempts to find middle ground with them using the language barrier as a crutch. Why would they ever even listen to this crazy westerner talk about how dogs are good and change their deeply rooted perception of dogs?!?

I went over to my friend, the probable perpetrator, and with google translate tried to ask him his name. Apparently, he could not read. He asked one of the younger guys to come out and read what the translation said. Suddenly he had a huge smile on his face. I asked several other questions about him and also told him that his father, one of the other workers, reminded me of my grandfather because he was the most hardworking of the group and probably the oldest at 67. We were about to walk away very happy with our mini conversation when I worked up the courage to type one last sentence, ‘if you are nice to the dog, she will be nice to you.’

The main reason I want to share this story is because there have been so many times I’ve seen animal activists get insanely upset and angry at the person/groups/countries inflicting pain on animals. If we as activists could solve all animal suffering with our rage/blaming/shaming it would be lovely, but it solves nothing and creates barriers to becoming problem solvers instead of just a complainer. I think that shaming an entire group of people only helps us feel good momentarily, but we don’t see the ripple of bad we are creating in doing so. The energy we put out into the world is what we end up attracting to ourselves. In order to create change, it is essential to have the buyin of those which we would like to convince to be more humane toward animals and buyin only happens if we stop looking down on people and start putting ourselves in their shoes.

The relationship that I now have with my new friend and his father are one of my favorite parts of volunteering at this workaway. They are always trying to make me laugh, shake my scaffold to scare me, they added more scraps of wood to my scaffold so that I could feel more secure, they hammered all of the nails sticking out on my scaffold so that I stop scraping up my legs, they move my very heavy scaffold for me almost every time now without me asking, and they give me pointers on how to efficiently remove the stubborn paint from my skin. I have absolutely loved working alongside them these past few days.

Our more aggressive dog Bonnie still barks at them whenever they get too close, but I haven’t seen them taunt her in a while. I feel as if it is the beginning of shift. ?

Tongka Village and the Forest

Creating space and the enjoyment of solo travels

Creating “Big Magic.” That feeling of amazement as things begin to click.  When you come into your...

A lot of eminent historians and archaeologists insist that Plato invented Atlantis completely, but the explanation...