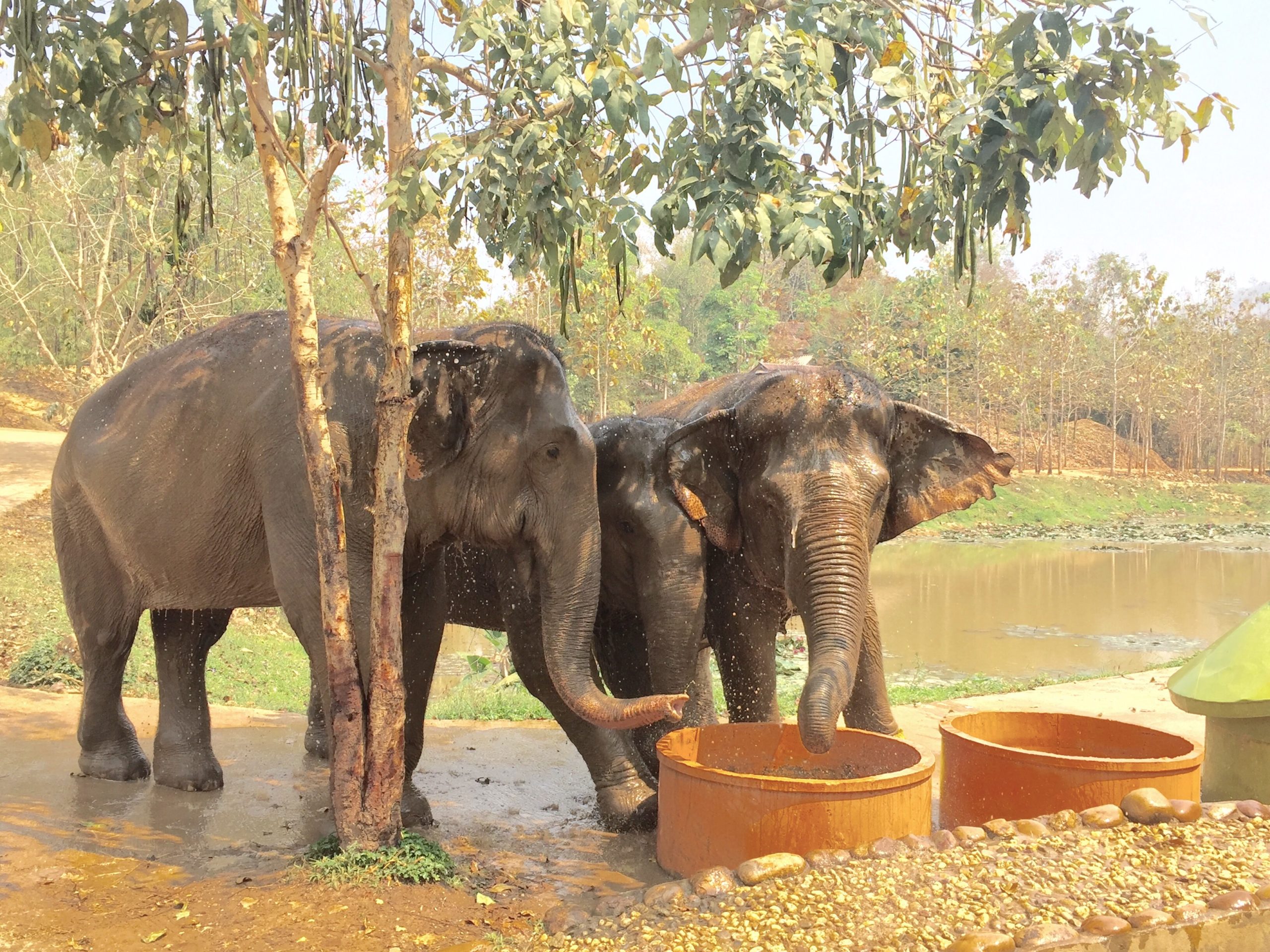 My visit to Boon Lott’s Elephant Sanctuary (BLESE) near Sukhothai, Thailand, was probably my favorite part of my 5 months of travel. Most people know my love for elephants and several share my same amount of admiration for them which is why elephant tourism is such an ugly beast in Thailand. So many tourists come to Thailand wanting to get up close and personal with elephants and don’t realize the abuse that runs rampant in the industry.

Katherine Connor started the sanctuary after caring for Boon Lott (little survivor) where she had been volunteering for 2 years. Boon Lott was born prematurely and his owners were going to separate him from his mother and put him at a tourist camp. Boon Lott was her first rescue and since then she has done everything she can to help the elephants without berating or judging the mahouts and elephant owners.

Most elephant owners truly care for their elephants but have only ever known the elephants to be their source of income whether it be through illegal logging or tourism. Others only see them as a source of income and don’t care. Instead of rescuing older injured elephants from irresponsible camps that just want to make space for the new baby elephants that bring the tourists, Katherine refuses to give her money to these owners. Instead she only rescues from those that want to create change in their lives. In the past, her purchase has helped elephant owners leave their old ways behind and her funds have helped put their children through school and paid for expensive surgeries for their children instead of going to elephant owners that will use her funds for purchasing new elephants.

The mahouts at the sanctuary are also helping Katherine with shifting the paradigm for elephants. When they go to rescue elephants, she brings along mahouts and is there for a few days interacting with the elephant’s owner. Her mahouts share positive reinforcement techniques as well as how to guide elephants through the use of their voice versus using bull hooks. Katherine believes it is more likely the Thai elephant tradition might evolve through mahouts or a Thai person sharing stories and successes versus having foreigners telling mahouts and Thai elephant owners that what they are doing is wrong.

Katherine is not just rescuing elephants she is trying to protect mahouts. Generally mahouts get paid much less than the average job in Thailand and are regarded as low class work, but she pays her mahouts a higher wage. She becomes fierce when she is talking about protecting mahouts just as she protects the elephants. It is so easy for foreigners to place their anger on the mahouts once they find out about the process of breaking elephant’s spirit in order to be used at riding camps, but Katherine and David Owen, my beautiful guide on my trip, made it a point to reiterate that we can not judge that which we truly do not understand. When jobs are scarce and there are children to feed it can be difficult to walk away from a job. They helped me realize that instead of hating the elephant owners that more energy should go toward education and getting tourists to understand what elephant tourism is really about. Anger solves nothing. When there is a “them” and “us” wall up, co-creative dialogue is stumped and it only perpetuates the problem.

Katherine is also trying to protect the environment through her sanctuary. The more acres of land she owns the less habitat is destroyed by illegal logging. Unfortunately, although it is illegal, it is still an issue. She has also recently switched over to using more grass instead of corn to feed the elephants which is less expensive to make and does not require pesticides. She is still paying locals what she would pay for corn even though it is cheaper. This not only helps the environment but the crop owners and the elephants digestive tracks.

While I was there I also sat in on a visit with another charity that will be helping them expand their sterilization program for the dog and cat community as well as heard them start developing ideas to help create an educational program to implement in schools for humane treatment of animals. Since I visited in March, I have seen that they have hosted two very successful weekends of mass sterilizations.

Also, they are probably the only sanctuary that has been able to have bull elephants in musth without being chained! This is a big feat as generally they can be very dangerous during this time, but since they have acquired so much land, they can keep the Bulls as close as possible to their natural element.

They are also different from other so-called sanctuaries that have loads of people everyday bathing and feeding elephants. It is because of this that they are my favorite sanctuary. It is a TRUE sanctuary. Although the elephants at these sanctuaries are happier not being used for rides and also are not poked and prodded with bull hooks, Katherine sees how much elephants enjoy splashing themselves with water and rolling around in ponds that she will never create a “bathe the elephants” or “feed the elephants” program because of this. The mahouts also let the visitors know when we were too close to the elephants and when it was okay to be near them, but it was evident that this is not the kind of place that allows masses of tourists to invade the elephant’s home.

Their gift shop also has a very small amount of items in it and are all ethically sourced. They even have bags, scarves, and table runners that are handmade by the women in the community with their silk weaving skills.

Overall, I think Boon Lotts is a beautiful sanctuary that respects the space of the elephants and only takes in 6 visitors max in order to keep it peaceful for the elephants. Katherine is someone very well respected by the mahouts and community and because of it she has the ability to lead by example and help the plight of the elephants.

Thailand: A closer look at animals in tourism.

Journey to Becoming a Yoga Teacher

Creating space and the enjoyment of solo travels

Generally, I love being on my own. I don’t mind eating alone in restaurants and also really loved getting to...

Music is such an important factor in my life and throughout my travels, I’ve gravitated toward certain songs...